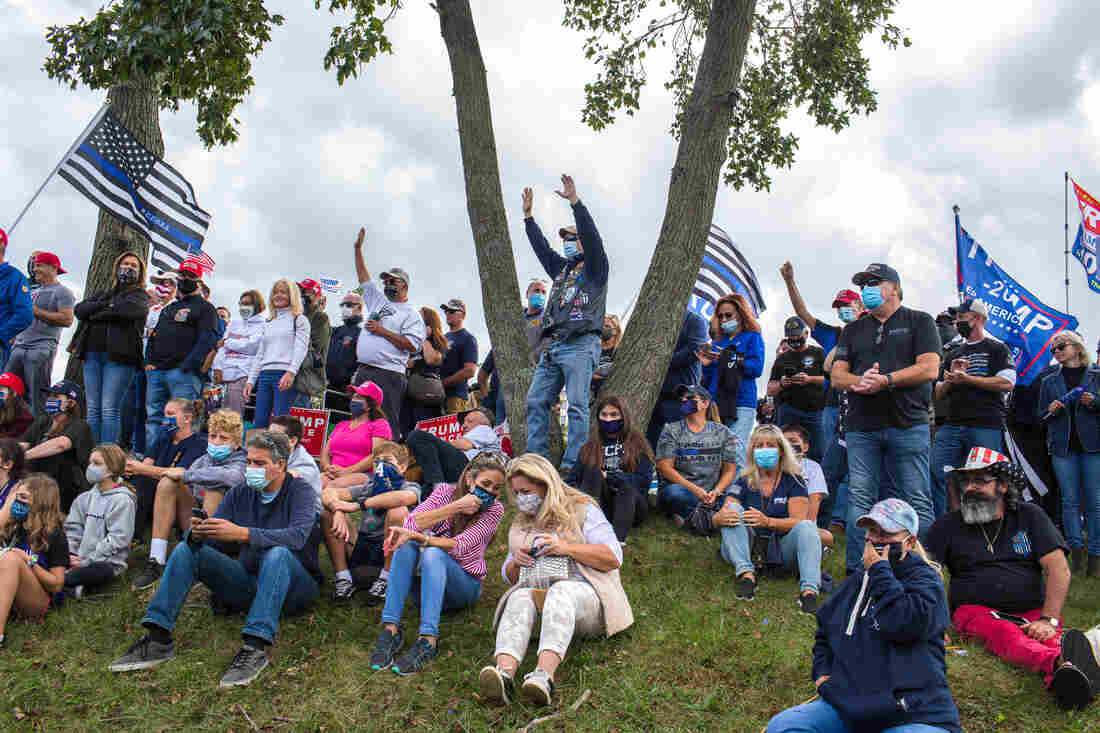 Trump supporters attend a rally hosted by Long Island and New York City police unions in support of the police on Oct. 4, 2020, in Suffolk County, N.Y. 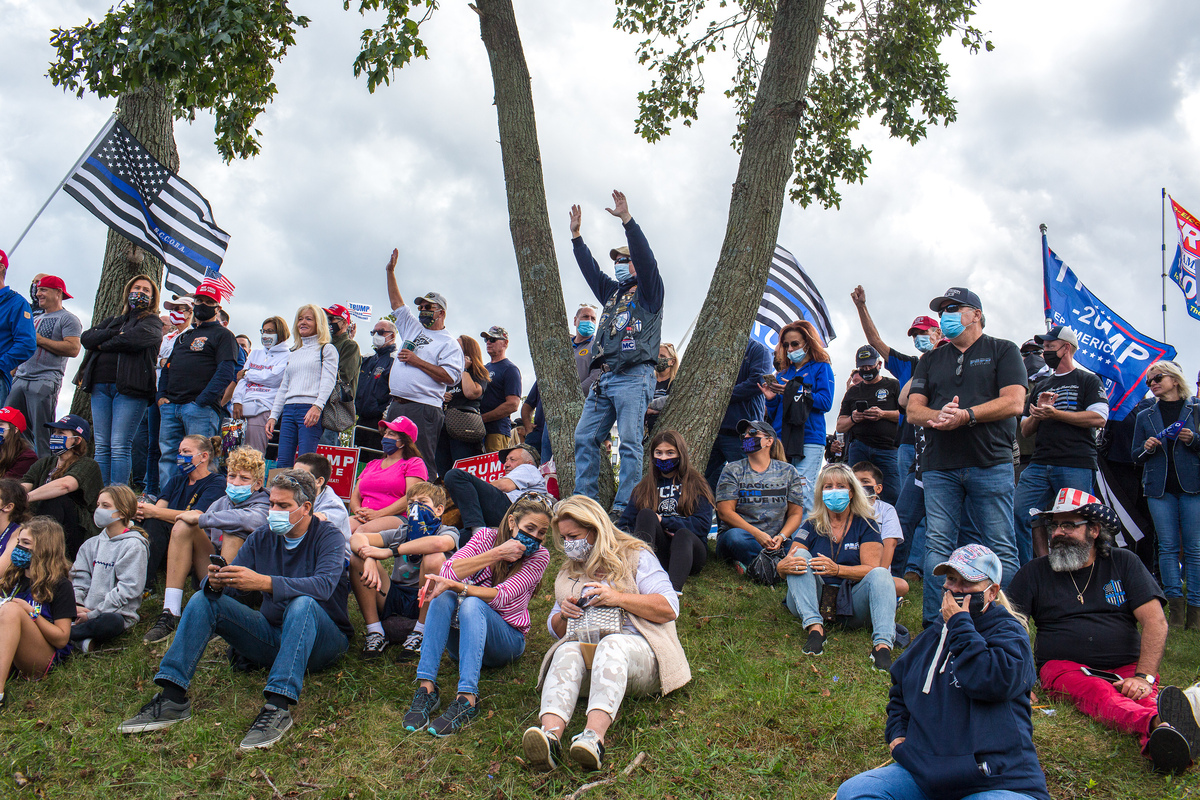 Trump supporters attend a rally hosted by Long Island and New York City police unions in support of the police on Oct. 4, 2020, in Suffolk County, N.Y.

In the aftermath of Wednesday’s siege of the U.S. Capitol, attention is turning to the nation’s police: How many sympathized with what happened?

The head of the Chicago police union minimized the severity of the riot, while his counterpart in Seattle repeated unfounded claims that the “far left” shared responsibility.

Around the country, police departments are following up on reports of off-duty officers spotted in Washington. The Seattle Police Department has put two officers on paid leave, as their participation is investigated.

“Officers, like anyone else, should be allowed to — and are allowed to — attend rallies,” says Andrew Myerberg, director of the department’s Office of Police Accountability.

“The question with the rally here, though, is did it go over the line of just being a political rally, to supporting insurrection or supporting a violation of the U.S. Constitution or the laws of a jurisdiction?” Myerberg asks.

In Washington, acting U.S. Attorney for the District of Columbia Michael Sherwin says his prosecutors are still assembling lists of people who may have broken laws on Wednesday. If cops are on that list, he says they face the same legal scrutiny as everybody else.

“I don’t care what you are or what your profession is or what color you are or what religion, if you participated in some of the activities we’ve seen inside of the Capitol in terms of just the destruction, it’s egregious,” he says.

There are also questions about the actions of police who were on duty at the Capitol.

According to Rep. Tim Ryan, D-Ohio, one of the officers took a selfie with a rioter, while another put on a Make America Great Again hat and “started directing people around.”

Politically, American police are now reckoning with the consequences of their support for Donald Trump. 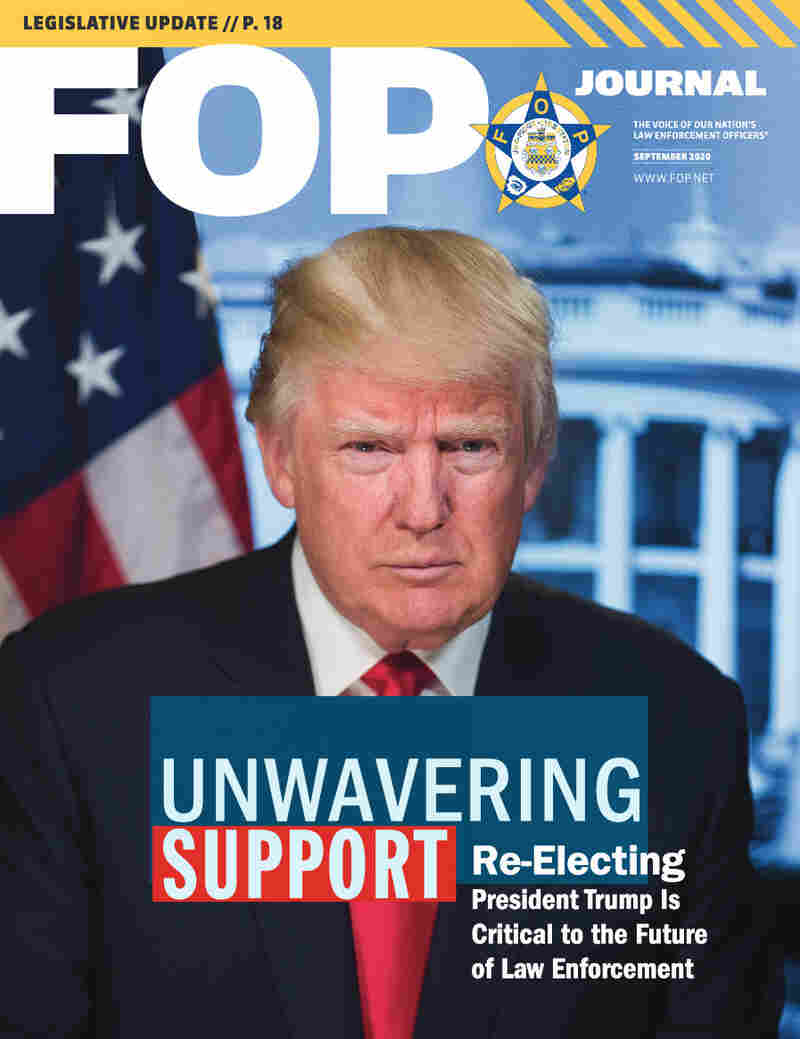 The September issue of the Fraternal Order of Police Journal featured the president on its cover. The FOP endorsed both of Trump’s presidential campaigns.

The largest national union, the Fraternal Order of Police, endorsed Trump in both elections, and the cover of the September issue of the union’s magazine featured a portrait of Trump with the caption “UNWAVERING SUPPORT.”

“We only have two candidates to choose from,” FOP Executive Director Jim Pasco told NPR in October. “We choose the one who supports us.”

National union leaders had little choice but to back Trump, as the endorsement was based on votes by rank and file members. Even after Trump refused to acknowledge his election defeat, the union didn’t distance itself.

The closest the FOP has come to criticizing the president was a statement last Wednesday by national president Patrick Yoes calling on Trump to “forcefully urge these demonstrators to stop their unlawful activity, to stand down, and to disperse.”

The images coming in from the United State Capitol Building today are heartbreaking to every American.

We call on President @realDonaldTrump to forcefully urge these demonstrators to stop their unlawful activity, to stand down, and to disperse. pic.twitter.com/lSLQoJlGVf

As a candidate and as president, Donald Trump embraced police. His rallies featured “thin blue line” flags and calls for law and order.

A law enforcement officer in the midwest, who did not want to be named because he doesn’t have permission to speak to the media, told NPR his colleagues’ support for Trump hardened during the anti-police protests and riots following the death of George Floyd. Floyd was physically restrained by police on a Minneapolis street and later died in their custody.

“There is a siege mentality in police-land,” the officer says. “It says the left is just going to keep pushing until we get rid of cops.”

He says his colleagues resent the media’s focus on abuses and excessive force by police this summer, while playing down — in the cops’ opinion — the episodes of looting, the burning of a police precinct building in Minneapolis and similar attacks on criminal justice buildings in Portland. He says their distrust of the media bolsters their belief in Trump’s baseless claims of a stolen election.

“They don’t exactly worship him, but he is their president. He is their guy,” he says.

University of Virginia Law Professor Rachel Harmon, who studies police interaction with the public, says there are also “substantive” reasons for the police backing of Trump. She cites the administration’s early opposition to federal “pattern and practice” reviews of allegations of excessive force by police departments.

Harmon says police liked the administration’s message that “individual police officers were being tainted and undermined, and there was undermining of the effectiveness of law enforcement by these overly aggressive investigations of police departments.” She says she doesn’t agree with that view.

Still, police support for Trump is not monolithic.

“Cops are not as dumb as everybody thinks they are,” says Joseph Giacalone, a retired NYPD sergeant who’s now an adjunct professor at John Jay College of Criminal Justice. He says police may have hoped to come under less scrutiny with Trump, but soon realized that wasn’t going to happen.

Giacalone points to a Trump speech in 2017, when he told an audience of police on Long Island, “Please don’t be too nice,” to criminal suspects.

“It just made cops’ job a lot harder,” Giacalone says. “It provides that bit of information, from the president of the United States and people take it as Gospel, and this is where you run into problems,” he says, referring to community mistrust of law enforcement.

Moments like that helped set the stage for the anti-police backlash this summer. National Organization of Black Law Enforcement Executives president Lynda R. Williams says police support for Trump has had a “negative effect on the various communities that we’re supposed to protect and serve.”

“You have people that are working off their political stance, instead of just being neutral and dealing with the problem at hand,” Williams says. “The community does not trust law enforcement, and that does not help it.”

Retired NYPD sergeant Giacalone agrees that police organizations should remain politically neutral. And that means, despite the problems created by Trump, police shouldn’t rush into the arms of the incoming Democratic administration.

“The vice president-elect didn’t win any cops over today, either,” Giacalone said on Thursday, referring to Kamala Harris’s statement that the events at the Capitol were a demonstration of “two systems of justice.”

“We saw one that let extremists storm the United States Capitol, and another that released tear gas on peaceful protesters last summer,” Harris said.

To Giacalone, that comparison is selective and unfair, and exploits the Capitol chaos to “pile on” the police.

“I think it was like 40 or 50 cops, you know, ended up injured,” at the Capitol, he says, “And the cops actually shot and killed a protester. I’d like to have someone point out in the entire summer’s worth of unrest where that happened — because it didn’t happen.”

Yes, he says, there were also massive security failures, but police fought fiercely to hold back the crowd. Five people died, including one officer.

And it’s not lost on him that the crowd beating and dragging uniformed officers was made up of the very Trump supporters who are supposedly on the side of law enforcement.

“The cops, in the end, have no friends,” he said, and Wednesday “was a prime example of that.”